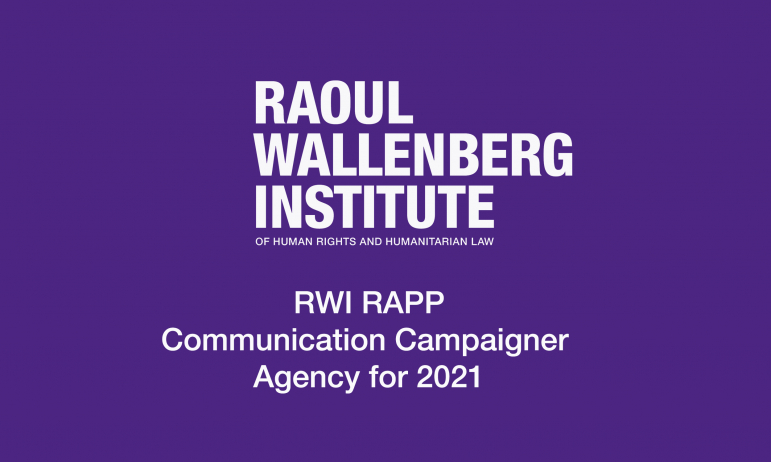 The Raoul Wallenberg Institute of Human Rights and Humanitarian Law is an independent academic institution, founded in 1984 and affiliated with Lund University in Sweden. The Institute contributes to a wider understanding of and respect for human rights and international humanitarian law. The vision of the Institute is just and inclusive societies with effective realisation of human rights for all. In light of this, the Institute contributes to strengthening structures, systems and mechanisms for the promotion and protection of human rights at all levels in society. RWI has since 1990 been implementing a wide range of human rights capacity development programmes for institutions in developing countries, mainly with the support of Swedish Development Cooperation (Sida). These programmes and projects have primarily targeted state agencies in the field of administration of justice, academic institutions and National Human Rights Institutions (NHRIs). RWI’s global thematic focus areas are economic globalisation, inclusive societies, people on the move and fair and efficient justice. For more info, please visit: (www.rwi.lu.se/www.rwi.or.id).

RWI has supported actors in the field of human rights in Asia since the mid-1990s through both bilateral and regional programmes. RWI’s regional cooperation in Asia focused for a long time on strengthening institutional capacities of academic institutions to carry out human rights education and research, and of NHRIs to fulfil their protection and promotion mandates. In recent years, RWI has increasingly focused cooperation in Asia on the field of human rights and the environment, linked to the sustainable development goals.

RWI launched a new regional programme for the Asia Pacific in 2017, entitled “RWI Regional Asia Programme on Human Rights and Sustainable Development 2017-2021” (RAPP) funded by Sida. The programme started with a pilot phase during 2017, aimed to validate and consolidate strategies and partnerships for the implementation phase 2018-2021. The overall programme objective is to contribute to a just, inclusive and sustainable development in the region through mutually reinforcing protection of human rights, gender equality and the environment. The 2020 programming focuses on thematically underpinning activities and promotion and dissemination of interlinkages on human rights, gender equality and the environment, which include :

3) Relevant coalitions, networks and collaborations have their knowledge bases strengthened and expanded on human rights, gender equality, and environment.

4) Increased public awareness and discourse of the interlinkages between human rights, gender equality and environment.

From November 2020 until May 2021, RWI ran a communication campaigned that focused on raising its profile and visibility in the Asia Pacific, while promoting greater awareness of the nexus between human rights, gender and the environment. The campaign was supported by FMG (Future Mediatrix Group) Indonesia and includes an analysis report for establishing baselines and the impact of the various strategies adopted.

RWI’s 2020/21 campaign utilised social media applications and established a landing page for RWI’s RAPP (https://rwi.or.id/). The content of messaging was presented by three social media influencers and through more traditional means, such as press releases and short-messaging. RWI’s existing research material supported the messaging projected via these online communication mediums.

2. Brief Purpose and Description of the Activity

RWI’s Jakarta/Regional Asia Pacific office is seeking the services of communication agency to develop and deliver another communication campaign for 2021 to raise public awareness and add to discourse on the interlinkages between human rights, gender equality and the environment.

The campaign is expected to build on the momentum established by RWI’s 2020/May 2021 communications efforts and apply the recommendations and lesson learnt in FMG’s final report.

RWI is equipped with a range of communication materials and channels such as: a series of publications, promotional videos, social media channels and a website. The communication agency is expected to deliver a communication campaign for RWI that utilises and capitalises on its established tools, but also adds to them.

Promoting and advertising RWI’s RAPP content and materials through digital platforms and mainstream media are considered leading options for channelling content and delivering the campaign, however, this is open to suggestions and guidance from the communications agency, considering the target audience of this campaign, compared to the previous campaign.

For more detailed info please download the TOR below :