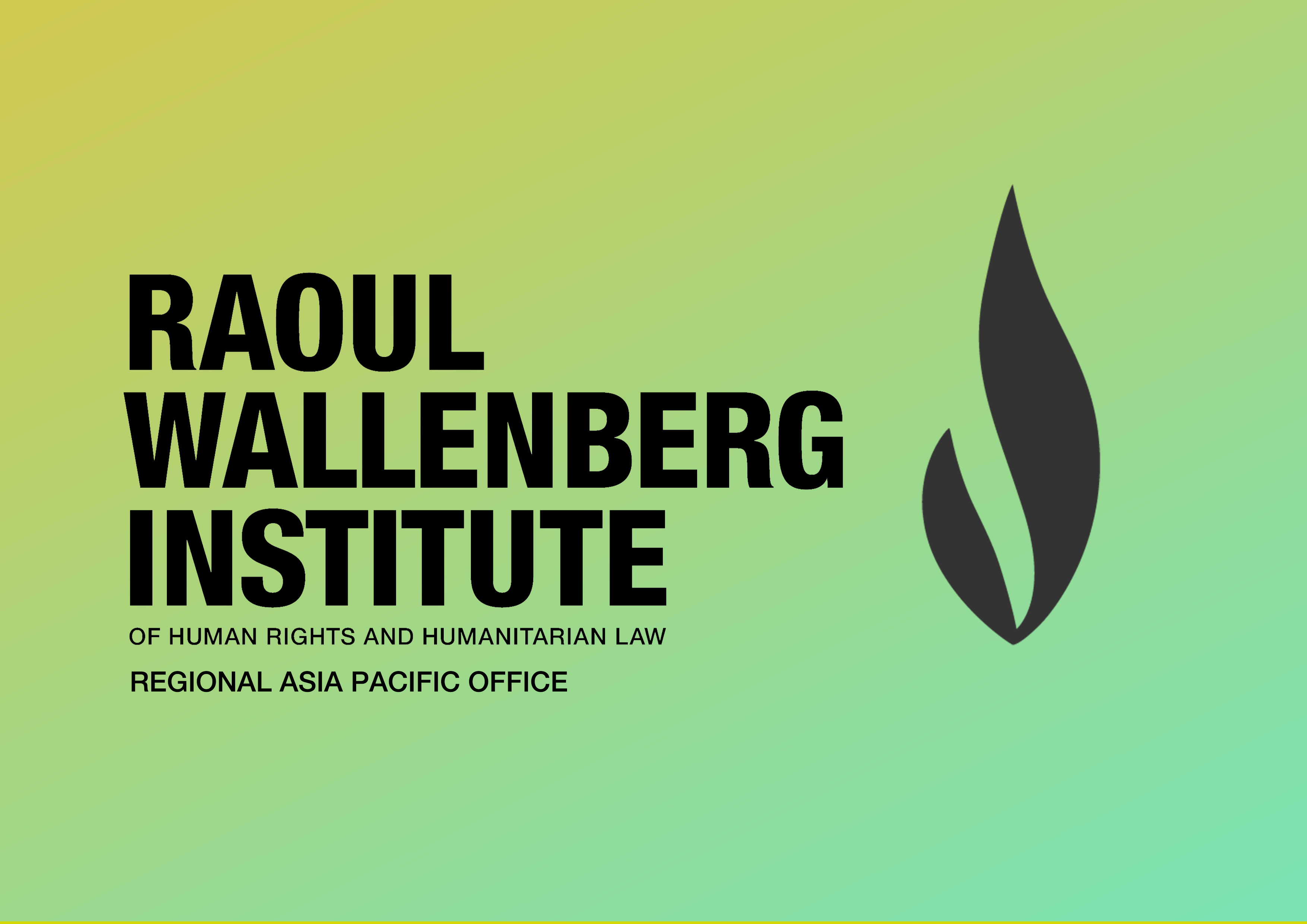 Mission: To contribute to a wider understanding of, and respect for, human rights and international humanitarian law.

Vision: Just and inclusive societies with the effective realisation of human rights for all.

Established as a charitable trust in Sweden in 1984 – and named after Swedish diplomat Raoul Wallenberg to honour his humanitarian commitment during World War II – the Raoul Wallenberg Institute of Human Rights and Humanitarian Law is an independent academic institution, with a mission to promote universal respect for human rights and humanitarian law through research, academic education and institutional development programmes. RWI maintains a primary vision to be a centre of excellence that contributes to society’s development through a human rights focus.

RWI’s unique blend of research and practical capacity development programmes – implemented around the world – allows for interactive activities that promote innovative programming and research projects. These diverse activities provide a platform for students, scholars and practitioners to come together and contribute to the development of their own societies, based on an approach that is centred on a human rights culture.

RWI’s work aims to contribute to institutional and legal development that results in the enhancement of equal enjoyment of human rights for all, which is achieved through the organisation’s efforts to deliver concrete results that contribute towards real, long-term and sustainable human rights change.

RWI in the Asia Pacific

The 21st century has seen significant advances and development across the entire Asia Pacific region, thrusting its diverse cultures and context into the international spotlight. Strengthened further by this unprecedented modernisation is the importance of ensuring a development context that is just, inclusive and sustainable, and one that mutually reinforces the ongoing protection of human rights, gender equality and the environment across Asia and its communities.

The Raoul Wallenberg Institute of Human Rights and Humanitarian Law (RWI) has been engaged across the region for over 25 years, playing a key strategic role to promote and support universal respect for human rights and humanitarian law during these times of significant growth and change. RWI has been – and continues to be – a constructive and credible long-term partner for governments, justice sector institutions, universities and civil society actors, implementing activities focused towards research, capacity development and overall human rights dialogue throughout the region.

RWI’s office in Jakarta, Indonesia, opened in 2005, originally supporting the nation’s Ministry of Law and Human Rights. While its context has evolved and expanded, the Indonesian office has continued its work across the diverse island chain, while also coordinating and supporting many of RWI’s regional activities.

RWI’s Regional Asia and Pacific Programme 2017-21 (RAPP) specifically supports the stronger alignment of environmental and human rights outcomes – and recognises the inherent interaction and mutual reliance between these two focus areas. Through support by the Swedish Development Cooperation, RWI is actively promoting and highlighting how intrinsic human rights are to responses to climate change and the environment.

People and the active inclusion of their rights are fundamental to sustainable change initiatives and the visioning required to ensure a safe and healthy environment for all to enjoy and thrive in. 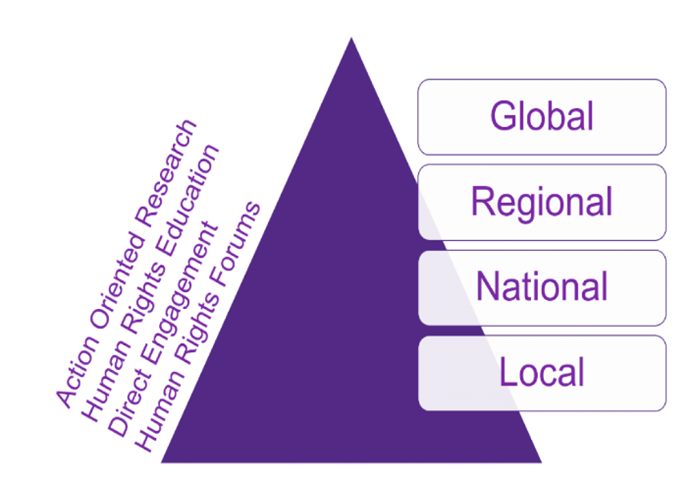 The RAPP intervention logic aims to connect the four key development contexts (or locations), namely local, national, regional and global, each of which hold their own unique influence, coordination and governance, but are all responsible for human rights, gender and the environment. By enabling a proportional connection between these levels, the intervention logic then promotes action-oriented research to ensure practical application through direct engagement with stakeholders. This is followed by public and strategic dissemination to support discourse and awareness regarding the interconnectedness of human rights, gender and the environment.

RWI is connected across the Asia Pacific with the various networks that exist to promote and enable the best human rights centred development possible.

RWI has the capacity to work across themes and has forged a reputation of a partner who delivers dependable contributions.

RWI is committed to a human rights based approach in all its engagements which has consideration, inclusion and meaningful participation at its core. RWI’s skilled capacities in this area has seen it partner with a wide range of stakeholders, to ensure the realisation of human rights obligations in practical responses to climate change and environmental concerns.

RWI is a human rights partner who takes the change journey with stakeholders through enabling connections, forging relationships, sharing contemporary trends and finding common areas of need. RWI maintains a non-monitoring approach with national and regional stakeholders, choosing to rely on dialogue and trust in relationships to enable a respectful response to human rights obligations.

People on the Move

One of the highest-risk groups in relation to human rights violations are migrants and refugees – or in general, people on the move. The Asia Pacific is home to a broad array of people on the move – including economic migrants, as well as refugees forced from their homes by environmental disasters. Additionally, there continues to be significant cases of forced displacement due to direct human rights violations by governments or their related institutions.

Many Asia Pacific nations shoulder a responsibility for refugees and migrants, doing so with limited support, compounded by policies and regulations that afford limited protection or support to those displaced. Internal displacement, due to disaster or conflict, is also a common occurrence in the region, challenging national and local governments on an array of human rights issues under such circumstances.

A core working area of RWI globally since its foundation, the development of inclusive societies ultimately promotes the dignity and worth of each individual – thereby forming the backbone of human rights more broadly. To achieve this, work must be undertaken to overcome structural inequalities and exclusion, as well as developing societies that unreservedly value and embrace diversity and pluralism.

To achieve this, there is a strong need to develop accessible and effective remedies for overcoming human rights violations. The adaption of such actions to local, specific contexts is all the more important for the Asian Pacific region, that is home to populations and cultures that are inherently diverse and unique. RWI works towards Asian Pacific societies that aim to empower and promote social, economic, and political inclusion for all, regardless of age, gender, disability, race, ethnicity, origin, religion, economic, or other status. Overall, RWI envisions Asia Pacific societies that leaves no one behind.

Ensuring inclusive societies is an all-encompassing task that involves improving research and knowledge, supporting direct stakeholder engagement, promoting participation and rights-based approaches, and facilitating policies and regulations that consider the rights of all. National programmes such as human rights cities in Indonesia, see RWI supporting policy makers and legislators developing more inclusive cities for their citizens, by promoting and engaging the idea of human rights for all within local governance policy and regulations.

Justice systems that are fair and efficient remain a key pillar of society, established through strong human rights and rule of law, while ensuring they are humane and accountable. RWI works with key stakeholders across the world to promote justice systems that are accessible for all citizens, and that ensure respect for the human rights and freedoms of all who engage within them.

Working towards fair and efficient justice requires a multitude of interventions through an array of institutions and groups, including governments, courts, prisons, bar associations, policing functions and prosecuting authorities. It involves raising awareness, developing capacities, and supporting the implementation of human rights friendly practices undertaken by all parties within a justice system.

RWI has supported strengthening the justice system with examples such as, a cooperation with the Indonesian Directorate General of Correction focusing on practical implementation of the UN Standard Minimum Rules for the Treatment of Prisoners, and producing a comprehensive report on juvenile justice in ASEAN member countries and implementing trainings for different target groups on the topic. RWI RAPP programme is currently training and networking judges across the region on the nexus between human rights, gender and environmental law.

As the world continues to globalise at significant rates, there is a pressing need for stronger engagement of business and other private sector stakeholders on general and specific human rights matters. Working within key economic circles will help to ensure that globalisation can be equal and fair, and that environmental protection is continuously advocated for. As a result, three interrelated areas make up the focus for human rights within economic globalisation; namely human rights within business, the environment, and within overall human development. The Asia Pacific region has moved to the forefront of globalisation over recent years, ensuring that human rights are considered and acted upon within economically focused goals is important.

RWI continues to work with Asia Pacific business and private sector representatives, alongside civil society, UN and governmental stakeholders, to ensure that human rights, international practice standards and contemporary trends are being considered.

Some of our Asia Pacific partners include: